Throughout Bank Director’s annual Acquire or Be Acquired conference, I found myself in quite a few conversations about the continually changing nature of financial services. Many of these discussions revolved around the possibilities generated by traditional institutions partnering with emerging technology firms.  Some of these took place on-stage; for instance, I opened the second full day of the conference by polling an audience of 900+ on a variety of technology-related issues: 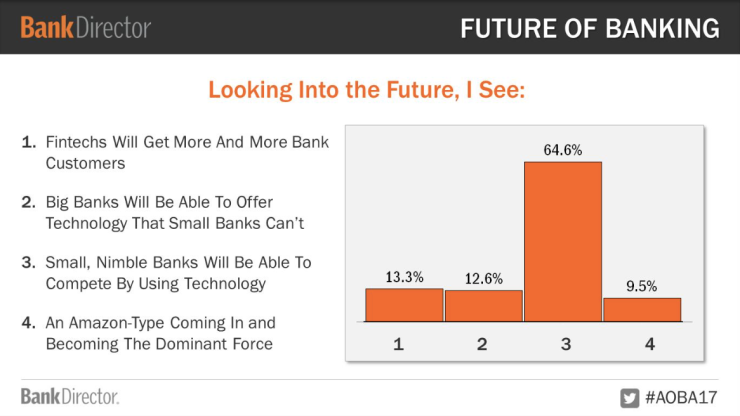 With results like these precipitating editorial coverage from our team and attendees alike, you’ll probably understand why I find the just-released ten finalists for our “Best of FinXTech Awards” so compelling.  Indeed, as the financial landscape continues to evolve, and executives grapple with a fast-changing operating environment that requires partnerships and collaboration, each of these relationships shows what is really possible when leaders explore something new together.

All ten of these partnerships demonstrate the strongest combination of collaboration and results.  For those interested, my colleague Kelsey Weaver (the President of our FinXTech platform) announces the three “winners” on April 26, 2017, during the FinXTech Annual Summit, at the Nasdaq MarketSite.

In advance of that announcement, I invite you to follow me on Twitter via @AlDominick, FinXTech’s President, Kelsey Weaver @KelseyWeaverFXT, @BankDirector and our @Fin_X_Tech platform and/or check out where and how this annual Summit — and these awards — fits into FinTech Week New York that we are hosting along with Empire Startups starting April 24.

One Reply to “10 Banks and Fintechs Doing it Right”