While I am bullish on the future of banking as a concept, I am admittedly concerned about what’s to come for many banks who struggle with cultural mindsets resistant to change. As I shared in an op-ed that kicked off last week’s FinTech Week NYC, the same dynamics that helped weather the last few years’ regulatory challenges and anemic economic growth may now prevent adoption of strategically important, but operationally risky, relationships with financial technology companies.

Most banks don’t have business models designed to adapt and respond to rapid change. So how should they think about innovation? I raised that question (and many others) at last Wednesday’s annual FinXTech Summit that we hosted at Nasdaq’s MarketSite. Those in attendance included banks both large and small, as well as numerous financial technology companies — all united around an interest in how technology continues to change the nature of banking.

More so than any regulatory cost or compliance burden, I sense that the organizational design and cultural expectations at many banks present a major obstacle to future growth through technology. While I am buoyed by the idea that smaller, nimble banks can compete with the largest institutions, that concept of agility is inherently foreign to most legacy players.

It doesn’t have to be.

Indeed, Richard Davis, the chairman and CEO of the fifth largest bank in the country, U.S. Bancorp, shared at our Acquire or Be Acquired Conference in Phoenix last January that banks can and should partner with fintech companies on opportunities outside of traditional banking while working together to create better products, better customer service and better recognition of customer needs.

The urgency to adapt and evolve should be evident by now. The very nature of financial services has undergone a major change in recent years, driven in part by digital transformation taking place outside banking. Most banks—big and small—boast legacy investments. They have people doing things on multi-year plans, where the DNA of the bank and culture does not empower change in truly meaningful ways. For some, it may prove far better to avoid major change and build a career on the status quo then to explore the what-if scenarios.

Here, I suggest paying attention to stories like those shared by our Editor-in-Chief Jack Milligan, who just wrote about PNC Financial Services Group in our current issue of Bank Director magazine. As his profile of Bill Demchak reveals, it is possible to be a conservative banker who wants to revolutionize how a company does business. But morphing from a low-risk bank during a time of profound change requires more than just executive courage. It takes enormous smarts to figure out how to move a large, complex organization that has always done everything one way, to one that evolves quickly.

Of course, it’s not just technological innovation where culture can be a roadblock. Indeed, culture is a long-standing impediment to a successful bank M&A deal, as any experienced banker knows. So, just as in M&A deals, I’d suggest setting a tone at the top for digital transformation.  Here are three seemingly simple questions I suggest asking in an executive team meeting:

From here, it might be easy to create a strategic direction to improve efficiency and bolster growth in the years ahead. But be prepared for false starts, fruitless detours and yes, stretches of inactivity. As Fifth Third Bank CEO Greg Carmichael recently shared in an issue of Bank Director magazine, “Not every problem needs to be solved with technology… But when technology is a solution, what technology do you select? Is it cost efficient? How do you get it in as quickly as possible? You have to maintain it going forward, and hold management accountable for the business outcomes that result if the technology is deployed correctly.”

Be aware that technology companies move at a different speed, and it’s imperative that you are nimble enough to change, and change again, as marketplace demands may be different in the future. Let your team know that you are comfortable taking on certain kinds of risk and will handle them correctly. Some aspects of your business may be harmed by new technology, and you will have to make difficult trade-offs. Just as in M&A, I see this is an opportunity to engage with regulators. Seek out your primary regulator and share what you’re looking for and help regulators craft an appropriate standard for dealing with fintech companies.

Culture should not be mistaken for a destination. If you know that change is here, digital is the expectation and you’re not where you want to be, don’t ignore the cultural roadblocks. Address them. 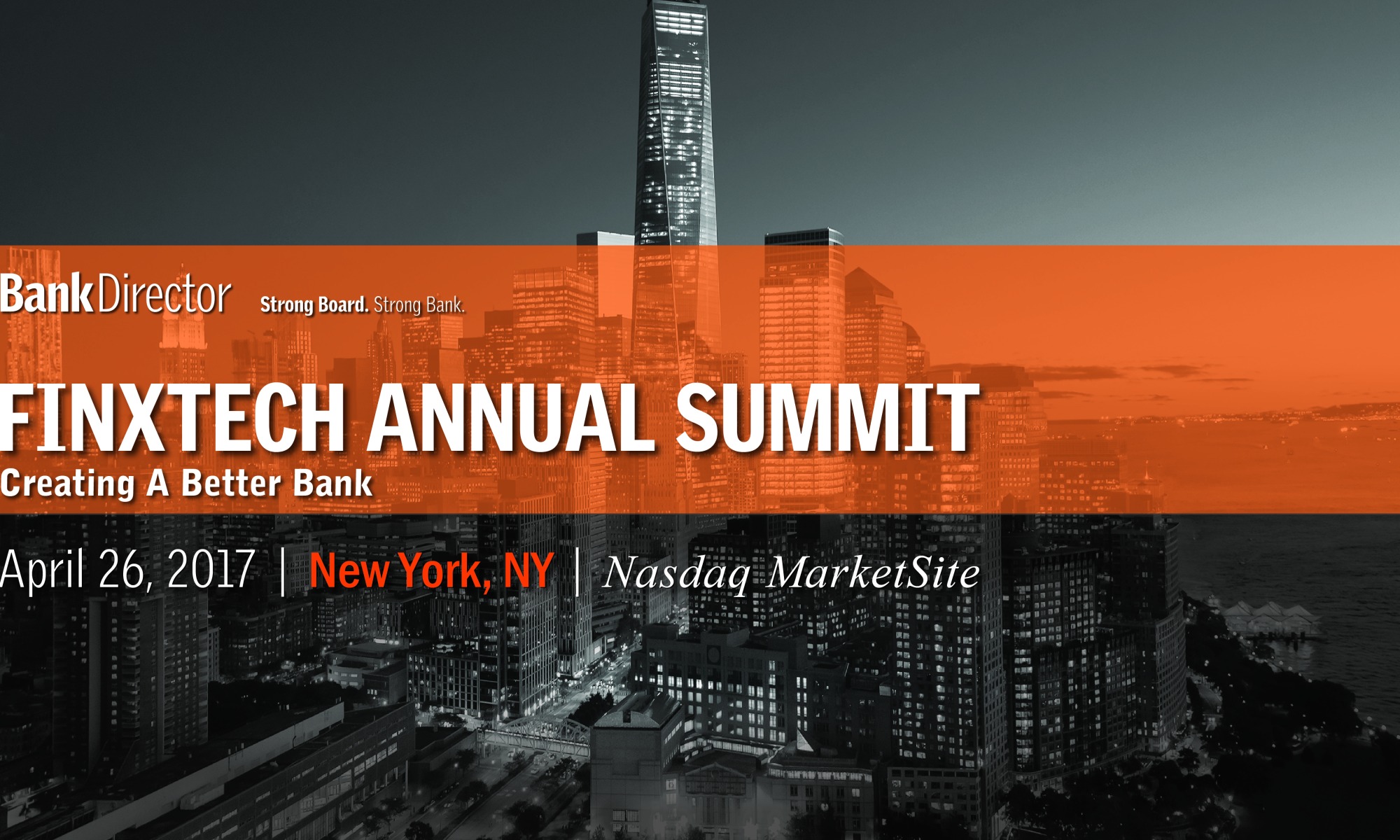 Throughout Bank Director’s annual Acquire or Be Acquired conference, I found myself in quite a few conversations about the continually changing nature of financial services. Many of these discussions revolved around the possibilities generated by traditional institutions partnering with emerging technology firms.  Some of these took place on-stage; for instance, I opened the second full day of the conference by polling an audience of 900+ on a variety of technology-related issues:

With results like these precipitating editorial coverage from our team and attendees alike, you’ll probably understand why I find the just-released ten finalists for our “Best of FinXTech Awards” so compelling.  Indeed, as the financial landscape continues to evolve, and executives grapple with a fast-changing operating environment that requires partnerships and collaboration, each of these relationships shows what is really possible when leaders explore something new together.

All ten of these partnerships demonstrate the strongest combination of collaboration and results.  For those interested, my colleague Kelsey Weaver (the President of our FinXTech platform) announces the three “winners” on April 26, 2017, during the FinXTech Annual Summit, at the Nasdaq MarketSite.

In advance of that announcement, I invite you to follow me on Twitter via @AlDominick, FinXTech’s President, Kelsey Weaver @KelseyWeaverFXT, @BankDirector and our @Fin_X_Tech platform and/or check out where and how this annual Summit — and these awards — fits into FinTech Week New York that we are hosting along with Empire Startups starting April 24.