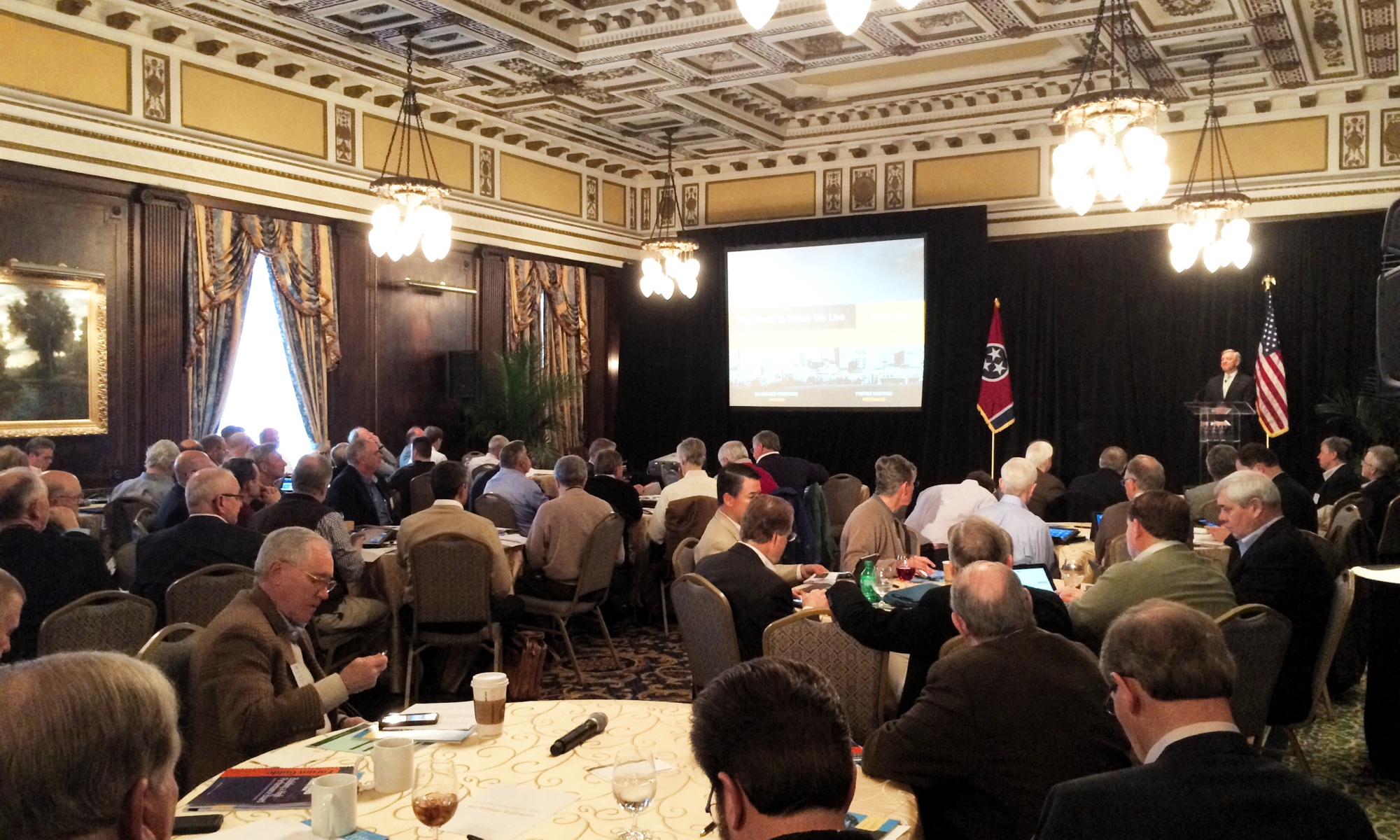 While much of Nashville took a snow day, I had the pleasure of spending time with bankers from across the country (who beat this morning’s storm) at the historic Hermitage Hotel for Bank Director’s annual Bank Board Training Forum.  Admittedly, I sometimes take for granted that a board of directors is responsible for monitoring financial performance, management’s performance, compliance issues and risk management.  A program like the one we’ve put together reinforces that the strategic side of running a business really requires a well-functioning, informed and courageous board of directors and men and women who are not afraid to be skeptical, diligent and courageous. So who’s with us in Music City? The demographics are as follows:

A number of presentations noted that financial institutions face a number of risks.  These range from economic factors to regulatory changes, shrinking margins to fee restrictions.  Knowing the extraordinary need for information about our increasingly complex industry, these takeaways stood out in terms of growing an institution:

When it comes to corporate governance (a term that refers to the structures & processes for the direction and control of a company) and the role of the board, I noticed that bank boards are increasingly independent and active.  In addition, it became clear that as technology changes, proactive input from directors has become even more important.  Finally, in terms of audit committee issues, it bears repeating that audit committee members are required to understand a broad range of highly technical financial, audit and risk management issues.  I was surprised to hear that a typical pitfall of the audit committee is not addressing complex accounting issues… which aligns with the point that board members need to know banking — “not just your bank.”

Now, even if we get more snow & ice, the lights will be on again tomorrow here in Nashville where we continue to cover board-specific issues.  I’ll be checking back in after we wrap up the program and invite you to connect via twitter (@aldominick) or via LinkedIn.

A man who views the world the same at fifty as he did at twenty, has wasted thirty years of his life.

Muhammad Ali certainly spoke the truth when he shared this thought in 1975 — and he makes a compelling case for attending an event like tomorrow’s Bank Board Training Forum at the historic Hermitage Hotel in Nashville, TN.  Personally, I made it into Nashville yesterday morning and with a few unexpected minutes on my hand, found myself engrossed in our inaugural issue of Bank Director magazine from 1991.  To open the magazine, our first editor opined “gone are the days when a bank could afford to stack the board with a compliant group of community leaders whose board membership was little more than a public badge of professional achievement.”  Just as true then as now!

While there are a number of banking conferences happening across the country over the next few weeks, this is the only one I know of that caters to an audience of key decision makers committed to the concept a strong board makes for a strong bank.  The curriculum, developed by industry experts and spearheaded by our editor, Jack Milligan, provides some 120 attendees with both foundational knowledge and the latest information on best practices in all of the critical areas that directors must understand.  From growing the bank to protecting its assets, attracting and compensating the right team to getting current with accounting, regulatory and legal requirements, I know we’re in for a spirited day and half.

If you’re curious to see what we have planned, here’s a link to both BankDirector.com’s event page and also a special piece authored by my friend and colleague Jack entitled “What You Don’t Know Can Hurt You.”  As he makes clear, curiosity has no age.

Fundamentally, risk oversight is a responsibility of the board.  One big takeaway from yesterday’s Bank Audit and Risk Committees conference (#BDAudit14 via @bankdirector): the regulatory framework has changed considerably over the past 12 to 18 months — with less focus being placed on things like asset quality and more on operational risks and new product offerings.  To this end, I get the sense officers and directors cannot always wait for the Federal Reserve or other agencies to release guidance to get a sense of the potential impact on their institution.

Overall, the issues I took note of were, in no particular order: (a) when it comes to formulating a risk appetite, no one size fits all; (b) a bank’s CEO and/or Chairman should establish a formal, ongoing training program for independent directors that provides training on complex products, services, lines of business and risks that have a significant impact on the institution; (c) bank examiners are increasingly asking more probing questions regarding new products and services & third-party vendor risk; (d) the DOJ’s “Operation Chokepoint” use of the banking system to identify fraud and criminal activity in certain areas perceived as high risk was mentioned in three different general sessions; and (e) cyber security is the hot topic.

A Two and a Half Minute Recap

To comment on this piece, click on the green circle with the white plus (+) sign on the bottom right. More from the Palmer House in Chicago, IL later today on twitter (@aldominick) and again tomorrow on this site.

I had the pleasure of welcoming two new members to Bank Director earlier this week… Jake Massey and Katy Prejeant joined our team and both have set up shop in our Nashville offices.  As you can see, we invited them east to spend some time in D.C. with our Associate Publisher (Kelsey Weaver), SVP (Mika Moser) and me.  With the five of us huddled around a table on Monday and Tuesday, my focus was admittedly more internally focused then normal.  What follows, however, are three things I subsequently heard, discussed and find myself thinking about as the week wraps up.

(1) Politico shared the opinions of Chris Dodd (Connecticut’s former senator) and Barney Frank (a former congressman from Massachusetts) in an op-ed entitled “Pulling the Plug on Failed Financial Institutions.” In it, the two contend that their infamous financial reform legislation ends forever the ability of the U.S. government to provide support to failing financial companies.  “The Dodd-Frank Act is clear: Not only is there no legal authority to use public money to keep a failing entity in business, the law forbids it,” they write.  While there are parts of their bill that are potentially helpful, “on the bigger picture – whether too-big-to-fail financial institutions still benefit from implicit government subsidies and a high probability of explicit bailouts,” the former Chief Economist of the IMF respectfully disagrees with duo.  Indeed, on the NY Times Economix blog, Simon Johnson writes he feels this way — and is not alone.  Case-in-point, he highlights a point Fed Chairman Bernanke made in response to recent questioning from Senator Elizabeth Warren.  Essentially, Bernanke “confirmed that credit markets still believed the government stands behind big banks.” A fascinating juxtaposition of perspectives courtesy of Politico and the NY Times on our biggest financial institutions.

(2) Last week, Davis and Henderson (D+H) announced it was buying Harland Financial Solutions.  American Banker subsequently ran an interesting article appropriately named “Your Tech Vendor’s Been Sold — What Do You Do Now?” (*subscription required).  While not so much a blueprint as an overview, take note that “regulators are pressing banks to complete thorough due diligence on third-party vendors. But things can get complicated by consolidation of technology firms.”  I wrote about this after our annual Bank Audit Committee conference; albeit, with an eye towards evaluating your external auditor.  The same principles apply here, and a separate article on AB identifies several key components of IT contracts that need extra attention.  Having worked for an IT company from ’05 to ’10, I do understand the challenges they have as services and tools providers in terms of pricing and structuring mutually beneficial contracts.  I do wonder how thoroughly bank executives consider strategic and risky technology plans.  Sure, the expense side can be calculated.  However, this second piece makes clear that “many smaller banks fail to think about exit strategies when negotiating technology contracts.”  Caveat emptor…

(3) Leaving the Latin, but not learning, aside, my final point goes to a new training program spearheaded by our very talented Editor, Jack Milligan.  Now, its been said that you rarely see a strong board with a weak bank — or a strong bank with a weak board.  So as part of our commitment to building stronger banks by building stronger boards, we introduced the Board Training Program yesterday afternoon.

This is a comprehensive and board-focused educational platform developed by a faculty of industry experts.  Take a look and listen to Jack as he explains how we will cover such important topics as the role of the board, risk management, key audit, compensation and governance issues, and advice on growing the bank.

After spending the past two days with bank CEOs, Chairmen and lead outside directors from 45+ banks (roughly half being publicly traded), I thought to share the following video on a training & education program offered by Bank Director.

Since 1991, Bank Director has supported chairmen, CEOs, CFOs, general counsels, presidents and board members of financial institutions nationwide with timely and relevant information and events.  In response to recent pressures placed on the banking community, our team introduced a board education program (DirectorCorps) as part of the services we offer.  This is not a one-time learning opportunity; rather, an ongoing collection of in-person, in-print and online resources for those wanting the highest performing bank board.  As quite a few of the attendees at our annual Chairman/CEO Peer Exchange inquired about what this is all about, take a look at this video we just posted: