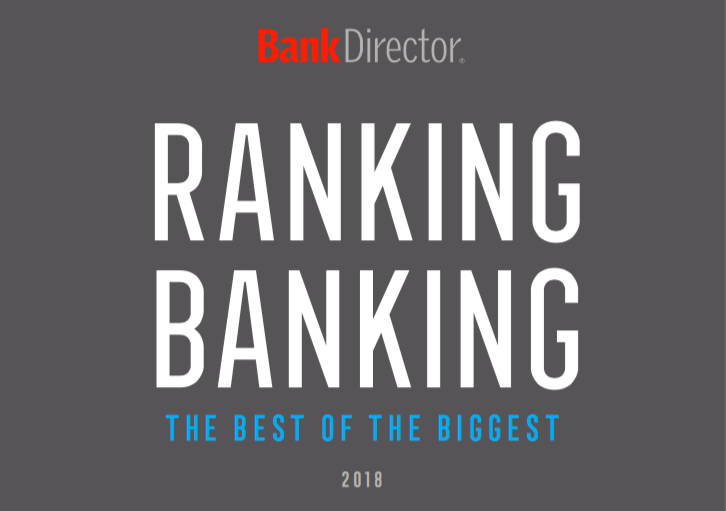 WASHINGTON, DC — It is with tremendous pride that I share the results of Bank Director’s year-long study on America’s 10 largest banks.   As my colleague, Bill King, wrote to open our inaugural Ranking Banking, we felt that a truly comprehensive analysis of the largest banks was missing, one that includes not just profitability or customer satisfaction ratings, but also compiles numerous measures of strength and financial health — a project to rank each of the largest banks for each major line of business based on qualities that all big banks need.

For instance, we decided to rank banks for branch networks, mobile banking, innovation and wealth management. We analyzed corporate banking and small business lending. We interviewed experts in the field and did secret shopper visits to the biggest banks to find out what the customer experience was like.  Unlike other rankings, we even included complaints lodged with the Consumer Financial Protection Bureau as one of many customer satisfaction metrics that we analyzed.  In other words, there is little about the biggest banks in the nation that we left out.

So who came out on top?

In fact, Chase won five of the ten individual categories and ranked near the top in three more, and was judged by Bank Director to be the most worthy claimant of the title Best of the Biggest Banks.  The individual category winners are:

In ranking the boards of directors of the big banks, Bank Director analyzed board composition by factors such as critical skill sets, diversity, median compensation relative to profitability and independence. Citigroup’s board best balanced all components.

Chase and runner-up Capital One Financial Corp. stood out for their media spend as a percentage of revenue, and both exhibited strong customer perception metrics.

Chase has been successful in driving new and existing customers to its mobile products, leading to an impressive digital footprint, measured through mobile app downloads. The bank’s app also scored well with consumers.

BB&T had a low cost of funds compared to the other ranked banks, and its acquisitions played a strong role in its core deposit growth, which far surpassed the other banks in the ranking.

Chase most successfully balanced actual results with sizeable investments in technological innovation. These initiatives include an in-residence program and a financial commitment to the CFSI Financial Solutions Lab. Chase has also been an active investor in fintech companies.

Chase barely edged out fast-growing Capital One to take the credit card category, outpacing most of its competitors in terms of credit card loan volume and the breadth of its product offering. Chase also scored well with outside brand and market perception studies.

Wells Fargo has long been recognized as a national leader in banking to small businesses, largely because of its extensive branch structure, and showed strong loan growth, which is difficult to manage from a large base. Wells Fargo is also the nation’s most active SBA lender and had the highest volume of small business loans.

Big banks serve big businesses well, and finding qualitative differences among the biggest players in this category—Chase, Bank of America and Citigroup—is difficult. But Chase takes the category due to its high level of deposit share, loan volume and market penetration.

With Merrill Lynch fueling its wealth management division, Bank of America topped the category by scoring highly in a variety of metrics, including number of advisors (more than 18,000 at last count) and net revenue for wealth and asset management, as well as earning high marks for market perception and from Bank Director’s panel of experts.

The 10 largest U.S. retail banks play an enormously important role in the nation’s economy and the lives of everyday Americans. For example, at the end of 2016, the top 10 banks accounted for over 53 percent of total industry assets, and 57 percent of total domestic deposits, according to the Federal Deposit Insurance Corp. The top four credit card issuers in 2016—JPMorgan Chase & Co., Bank of America Corp., Citigroup and Capital One Financial Corp.—put more than 303 million pieces of plastic in the hands of eager U.S. consumers, according to The Nilson Report.